A little while ago I had the fantastic opportunity to go on a cruise on Algoa Bay with Raggy Charters and it felt like we hit the jackpot that day. Whales, dolphins, bait balls, penguins, and the cherry on top, a killer whale.

The cruise was the first opportunity for me to see St Croix Island up close. St Croix Island is home to the largest breeding colony of African penguins in the world. At one stage there were 60 000 individuals on the island, but the population in our bay has dropped down to about 22,000 due to various reasons. The island houses roughly half of the entire world’s population. The African Penguin  (Spheniscus demersus) is only found on the southern African coastline and is also called a  jackass penguin due to it’s loud, donkey-like bray. Their conservation status is listed as Endangered.

St Croix Island along with Bird Island across the Bay were both utilised for food and supplies since the first Portuguese explorers rounded the Cape in 1488.  Both islands were targeted for bird meat by ships passing the bay and it was soon discovered that African penguin eggs were actually a highly tasty treat and became a delicacy. Throughout the 19th and 20th centuries egg collecting was so extensive that penguin numbers dropped to a shocking one thousand individuals in 1937. Guano (penguin dung) was also collected from both islands to be used as fertiliser and gun powder until 1955 on St Croix and until as late as 1989 on Bird Island. This was extremely disruptive to the birds but more importantly, it robbed them of important nesting material.

Today the African Penguin is a protected species

Cruising Algoa Bay with Raggy Charters is like a luxury lucky packet. You kinda know what you could find, but when you do it like wow in overdrive. As a tourism marketer promoting the Eastern Cape I have spoken about Raggy Charters and promoted what Algoa Bay has to offer for years with so many invites to join them on a cruise. Something just always came up until I got to finally join them on a cruise a little while ago. Our first big wow of the cruise was a pod of Common Dolphins cashing a sardine bait ball. We followed the pod cameras clicking and at times it felt like the boat was going full tilt to keep up.

Common Dolphins (Delphinus Capensis) is the most widespread and abundant of all the dolphin species, and can be found in pods of up to 2 000. They are highly efficient at capturing small shoaling fish such as anchovies, pilchards and krill. Swimming at speeds of up to 60km/h they hunt down their prey and encircle them driving the shoal towards the surface and continuously tightening the circle around them.

And if you’re lucky, you get a shot like this…

Port Elizabeth and Algoa Bay are promoted as the Bottlenose Dolphin capital of the world while St Croix Island has the biggest population of African Penguins in the world. I was lucky to get both species in one photo at St Croix on an outing with Raggy Charters a little while ago.

For more information – Bottlenose Dolphion Capital of the World

African Penguins – About 60% of the total global population of the endangered African Penguins live in Algoa Bay, 21 000 on St Croix, and 5 700 on Bird Island. Strange enough there isn’t a mainland population in the Eastern Cape and they only occur on the islands. 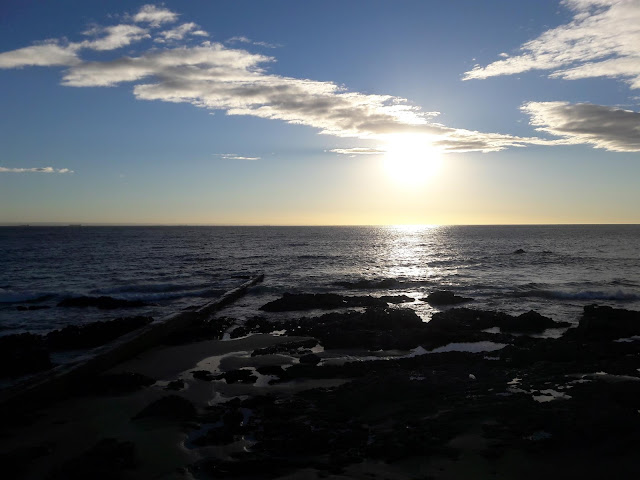 I’m still here.  I may not have posted anything on my blog for a month but I’m still around.  It’s scary though how busy my life has become between work, family, sport (the kids’, not my own) and everything else I’m involved in.  The two things that have suffered the most are my blog and exercising.  And to a lesser extend Geocaching.  Plus my laptop at home has packed up again.  You know how it is.  When it rains it pours.  If it would only do that literally in our catchment areas.  So I’m currently trying to wrap my head around how I can juggle it all and get blogging again.  In the meantime, I just had to stop on my way to the office this morning and grab this photograph to share.  Doesn’t matter how busy you are, you can’t help but stop to admire true natural beauty.

The beacon out at Cape Recife is one of two beacons that were used for shipping purposes before the invention of modern navigation technology.  The second beacon is the lollipop beacon on Marine Drive where Admiralty Road and Marine Drive comes together.  Ships sailing along the coast from the west had to line up the two beacons before they could turn into Algoa Bay.  This ensured that they were well clear of Thunderbolt Reef at the point as well as the reefs inside the bay itself.
Algoa Bay is one of six marine Hope Spots proclaimed along the South African coastline.  Although the Algoa Bay Hope Spots covers the whole diverse marine ecology of the bay it focuses on the African Penguin.  The other South African Hope Spots are  False Bay, Cape Whale Coast, Knysna, Plettenberg Bay and the Aliwal Shoal.  Check out this awesome mini documentary on the Hope Spot and learn more about the penguins and other inhabitants of Algoa Bay.

A lone fishing boat out in Algoa Bay at dawn
Usually this time of the year the sardines start to gather off the Port Elizabeth coastline before they start their run up the east coast.  It gives divers and film crews the ideal opportunity to observe the bait balls along with all the dolphin, whale, shark and bird activity that accompanies it.  Expert Tours based here in Port Elizabeth does a number of tours out to see this phenomenon and a week or two ago they had the most amazing encounter with orcas off the coast.  Their footage have now been broadcast on international television and I got hold of the footage on YouTube to share with you today.

North End Beach back in the days.  A stretch of sand all the way to the Swartkops River which could possible have become one of Port Elizabeth’s prime beachfront real estate areas if it didn’t fall in the hands of Railways and municipality.  This pictures dates back to 1902 right after the Grate Gale when 21 ships ran aground along North End Beach.

Today North End Beach is no more.  The beach and coastline was reclaimed, railway tracks, Settlers Freeway (M4) and the N2 was built along it and the sea is held back by dolosse.  Sad really when you think of the potential this area could have had.

I know the angle of the Now photograph isn’t the same as the Then, but I just haven’t been able to find a spot with uninterrupted views of the whole coastline like this one from Richmond Hill.  The houses in the foreground is just above Albany Road.

Nelson Mandela Bay Tourism has a brand new destination marketing video promoting the fact that Port Elizabeth with Algoa Bay and all it’s adjacent game reserve truly is an African Wildlife Hotspot.  At a recent tourism conference I attended, a representative of Kruger Lowveld Tourism in Mpumalanga implied during one of the panel discussions that the Eastern Cape doesn’t offer visitors an authentic wildlife experience.  So let’s see what Nelson Mandela Bay and surrounds have to offer.
Algoa Bay with it’s 40 km of magnificent golden beaches has one of the most diverse marine eco systems in the world.  Bird Island is home to the largest Cape Gannetry in the world (110 000 breeding pairs) while St Croix Island has over 50% of the world’s African Penguin population.  Add to that the fact that Algoa Bay has been proclaimed as an International Hope Spot for the African Penguin, is the Bottlenose Dolphin Capital of the World and offers whale watching and excellent scuba diving opportunities.
The area offers everything from rocky shores to indigenous floral fynbos, stretches of golden beaches and unspoilt sand-dunes (the Alexandria Dunefield is the largest coastal dunefield in the Southern Hemisphere) to lush indigenous forest and untamed wilderness areas.  This all means that the nature reserves in and around Port Elizabeth offer a wonderful range of options to the great outdoors.
Then there is the cherry on the cake.  Addo Elephant National Park, home to the Big 7, and number of excellent Big 5 private game reserves within an hour and a half from the city means that this region has developed into one of South Africa’s main game viewing destinations.  Who needs Kruger and the Lowveld when the Eastern Cape has such an awesome and very much authentic (and malaria free) wildlife experience to offer visitors?