Art in the Park truly has been a part of Port Elizabeth’s being for much longer than I can even remember. 35 years ago I can remember my mom having a stall at Art in the Park and how we spent the whole day playing around St Georges Park and going through the stalls. The stalls stretched all the way from the entrance at the art museum past the pool to the first big trees and then down to the pay area and consisted just about exclusively of handmade items. But over the years the number of visitors deteriorated, people bought less hand made items and thus the number of stalls deteriorated. These days there are literally only a handful of hand-made item stalls, as many food stalls and the rest are made up of second-hand items and bric and brac stalls.

Regardless of this, it’s still really nice going to Art in the Park on the first Sunday of the month to stroll between the stalls and look for a bargain or something you didn’t know you needed (or actually did need). This past Sunday (7 March 2021) was another beautiful sunny and mostly windless Sunday morning and a very good excuse for an outing to Art in the Park. It may not be anywhere it used to be, but long live Art in the Park.

A lot of the figures in the Voting Line art piece on the Donkin Reserve are based on real people. One of the things I like is the fact that you notice different personal or clothing features on the figures every time you visit.

The Karoo Heartland town of Somerset East is a place full of interesting and quirky attractions.  One of them is the Walter Battiss Art Gallery which also houses the local tourism information office.  Battiss (6 January 1906 – 20 August 1982) was generally considered to be the foremost South African abstract painter but is probably equally as famous as the creator of the quirky Fook Island.  Fook Island was Battiss’ “island of the imagination” for which he created a map, imaginary people, plants, animals, a history as well as a set of postage stamps, currency, passports and driver’s licences. He also created a Fookian language with a full alphabet.  Apparently Battiss, or “King Ferd the Third”, even traveled internationally using his Fookian passport.  You will have to make a little pilgrimage to Fook Island… I mean Somerset East, to see if you can perhaps find some signs of this place of wonder.

On my last visit to Cape Town I wanted to make sure I got to see the Madiba inspired “sunglasses” placed next to the promenade at Sea Point.  The art piece was created by artist Michael Elion, in conjunction with the City of Cape Town as part of World Design Capital 2014 and was in the news recently when it was defaced. 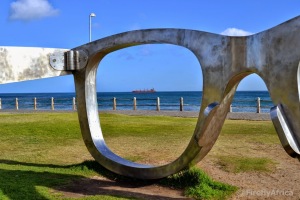 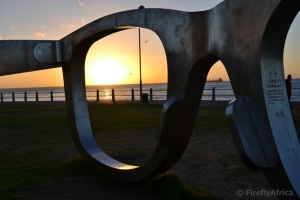 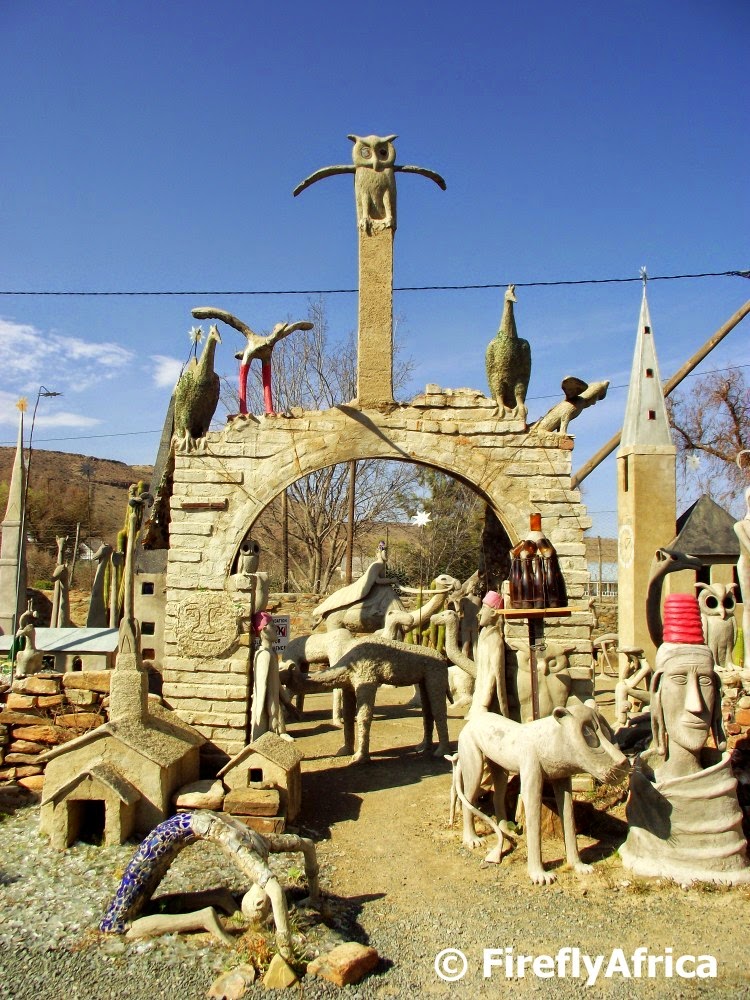 The Karoo Town of Nieu Bethesda is the kind of place everybody needs to try and visit at some stage in their lives.  Its not a big tourist orientated city but rather a small village that embrace their visitors.  The most famous attraction in Nieu Bethesda is the world renown Owl House.
The late Helen Martins spent most of her life in the town and the latter part of it transforming her ordinary Karoo home into a place of colour and light.  Over the years she and her assistant Koos Malgas, used concrete and glass to create a multi-coloured house and fantasy garden.  In the Camel Yard visitors will find statues of owls, camels, wise men and much more and one can literally get lost In your own thoughts trying to take all of this in.  Shortly before her 79th birthday, Helen Martins committed suicide by drinking caustic soda.  It is said that at the time her eyesight was failing because of damage from ground glass and that depression was getting the better of her.
At present the Owl House is open from 8 a.m. to 6 p.m. daily in summer and from 9 a.m. to 5 p.m. during winter. Entry is R50 per person for both adults and kids and R65 for a combo ticket for the Owl House and the nearby Kitching Fossil Centre.

Route 67 on the Donkin Reserve in Port Elizabeth has some really interesting art pieces ranging from real taxi’s mounted on a wall to the 470 square meter Piazza Mosaic next to the Pyramid.  Then there’s also the Voting Line with Madiba’s figure at the front standing under the tallest flag pole in South Africa sporting a 10 m x 15 m South African flag.
Looking across the reserve towards Algoa Bay stands a lone female figure on a pedestal. (Shouldn’t men put all women on pedestals?)  On closer inspection it becomes clear that the figure has no distinct features and that is the way artist Anton Momberg intended it.  The sculpture was left untitled by the artist so that it could become a conversation piece rather than a conceptually specific entity.  This means that she could actually represent all women in Nelson Mandela Bay.  KhoiSan and Xhosa women from the time when Dias first discovered Algoa Bay, the British Settler women who arrived in 1820 or the high powered modern business women and the humble domestic worker of today.  Black, White, Coloured, Indian, Asian, no matter who.
The art piece has become popular spot for photos with visitors sitting on the chair to have their picture snapped.

The 470 square meter mosaic next to the pyramid on the Donkin Reserve is one of the art pieces that has been installed in the area as part of the Route 67 development.  The mosaic celebrates the many cultures, heritages, diverse histories and abundant fauna and flora that characterises the city and province.  The mosaic was done by students from the Nelson Mandela Metropolitan University and is made up of a lot of different details.  I have posted a similar photo as the first picture taken from the top of the lighthouse in the past and somebody commented that they wish they could see a bit more detail. 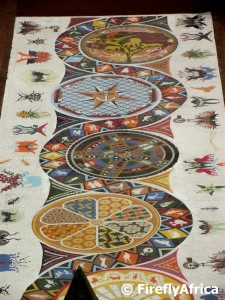 Its a bit difficult showing detail without having to take a number of closeup pictures, so I have zoomed in to show you as much of the mosaic in one picture as I could.

I’ve seen so many photos of the art pieces along the Sea Point Promenade in Cape Town that I put some time aside on my visit to the city to stop by and check it out.  The 18 sculptures depicts a story called Walking the Road and can be found all along the promenade.  Designed by sculpture Marieke Prinsloo, the pieces tell a story of a little girl walking along while dreaming she can fly.

Along the way she encounters a dragonfly and the tale continues on until the little girl’s arms turn into dragonfly wings and she flies with him.  The Little Girl in the artist’s fable-like interpretation representing a young South African democracy and the Dragonfly visualises a dream of freedom, equality and hope that we as a nation pursue.

According to the website the pieces were going to be on display for a year until the end of July 2011.  I was there on 30 July and there wasn’t any indication that they were going to be taken down yet.  I hope they stay up for a while longer cause they really give the walk along the promenade extra meaning.

Its amazing what the Zulu women can do with grass and coloured thread.  It takes them from several days up to a couple of weeks to produce the bigger baskets and items in the photograph above while one of the plate like baskets (at a loss for a better word for it) will sell for only between R100 and R200 (South African Rand).  An absolute bargain and must have memento of the area.