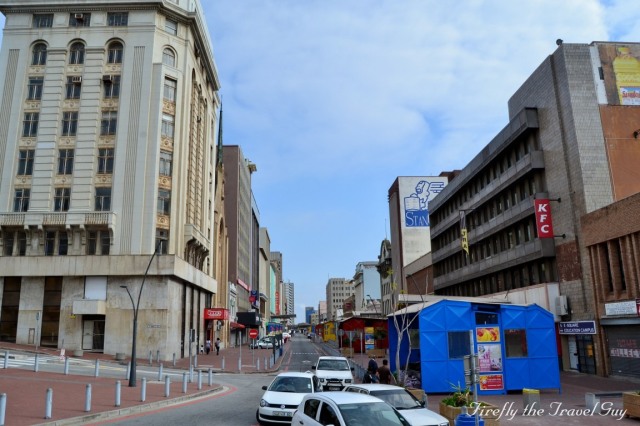 I don’t get down to Govan Mbeki Road that often and most of the time just driving through.  A little while ago I was in the area on a Sunday morning which means it was nice and quiet with very few people around.

Before the arrival of the British Settlers in 1820 the needs of the British garrison in Algoa Bay were served by chaplains in passing ships. By 1825 the town of Port Elizabeth had grown to about 500 people and Revd Francis McClelland was appointed Colonial Chaplain.  The foundation stone for the Collegiate Church of St Mary the Virgin was also laid that year.  The church was finally opened for worship in 1832. 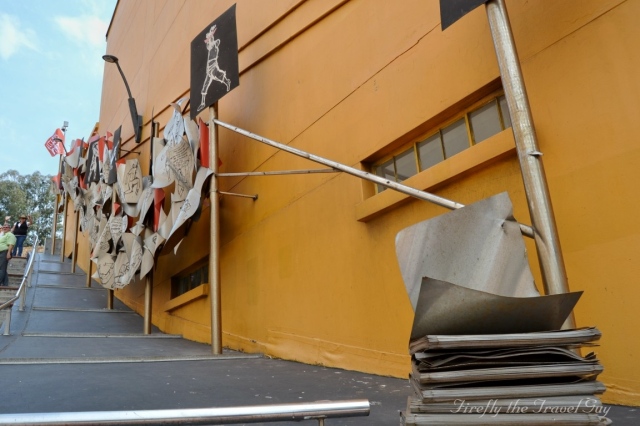 As one follows Route 67 from the city centre up towards the Donkin Reserve you pass the Public Library and St Mary’s Cathedral before climbing a set of steps up to Winston Ntshona Street (previously Chapel Street).  The art piece on the wall by the steps is a statement about the 76 generation (referring to the 1976 Soweto uprising) and represents the spiritual journey undertaken by those who fought against oppression.  The art piece takes the form of a pile of newspapers being blown away in the wind and the pages tell the story of the youth.
It’s sad though to see that a number of the newspaper sheets have been removed from the lower section of the piece.  Very disappointing to see their remembrance defiled like this.

The historic Port Elizabeth Public Library in the city centre has been closed to the public for over three years now with promises of renovations but excuses of no budget.  Well, if you had to pass the library today you won’t be able to see the scene in the photo.  It is because the library has been closed off and work seem to have finally started.  Or at least I hope.  An article in the Herald about two weeks ago says work on the structure has no finally started with the completion date around mid 2021. 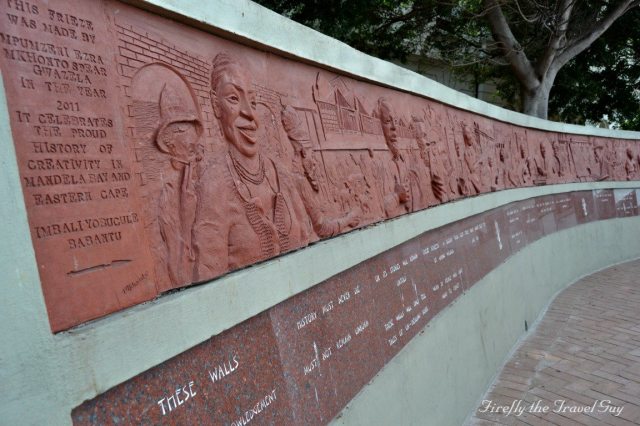 If you started a walk along Route 67 at the Campanile then the Campanile Frieze and Wall of Texts would be one of the first art pieces you’ll see.  Both of these are done by artist Mkhonto Gwazela.  The frieze at the top celebrates the indigenous heritage of Nelson Mandela Bay and the Eastern Cape with the sculpted visual image being cast in concrete along the curved wall.  The poem just below is engraved into locally-sourced granite. 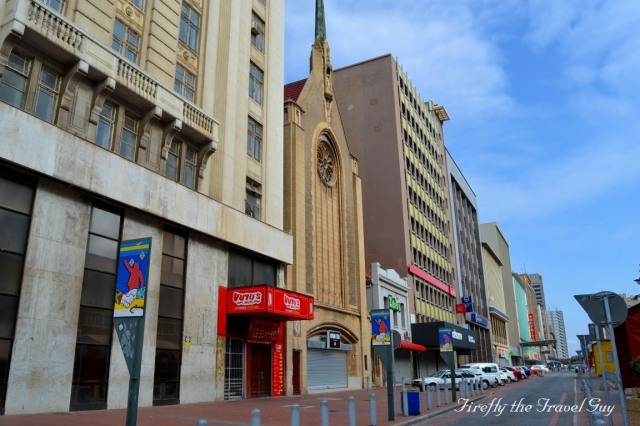 Anybody who knows Port Elizabeth and has been down to Govan Mbeki Road (Main Street) in the city centre, would know St Mary’s Anglican Cathedral near the Public Library.  But not just know it.  Also be aware of the old United Building Society building that stands on the corner in front of it blocking a proper view of the whole church and causing the front of the church to look like it’s standing on its own between the high rise buildings away from the rest of the cathedral behind.
In 1843 St Mary’s Church had to sell off pieces of its land to fund a building project and by doing so lost possession of some extremely valuable frontage to Main Street.  At that stage there was a servitude upon the property which prevented the stores built upon it from being raised high enough to block out St. Mary’s Church from the Main Street, but this eventually changed in later years which led to the situation we have today.

And with that 2017 is gone and 2018 have arrived.  I have seen a lot of people say that they are glad 2017 is over and done with and I took a little time to contemplate my own 2017.  I came to the conclusion that it actually wasn’t a bad year for me at all.  It was very busy though both from a personal as well as a work point of view and right now I can’t see 2018 being any different.  I will just have to work smarter and not necessarily harder.  One of the things I really need to do is find some more time for both my blogs.  PE Daily Photo took a slight break in 2017 and I’m not pressuring myself to post something every day anymore.  Unfortunately I totally neglected Firefly the Travel Guy though and I really need to focus on it a bit more than I did last year.  But all in all here’s to 2018.  May it be a great year full of all things nice. Health, wealth, family, friendship and all kinds of blessings.
I’m kicking 2018 off with a picture featuring one of Port Elizabeth’s most iconic sites, the Donkin Reserve.  This time seen from the top of another iconic site, the Campanile. 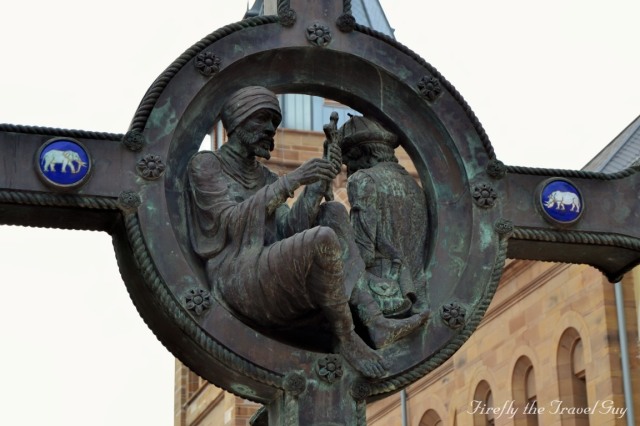 Following on the post about the Cross of Prester John and the Portuguese Explorers between City Hall and the old Post Office building, I decided to post a more closeup picture of the two figures sitting inside the cross.  The figures represent Prester John on the one side and a Portuguese explorer on the other side.  There is a whole lot more symbolism on the cross, but I’m going to have to do a little more research before posting about that.

Wedged in between City Hall and the Old Post Office building with the Feather Market Centre on the other side of the right is the Cross of Prester John.  The monument has no significant link to Port Elizabeth other than the fact that it was a stop en route to the East for Portuguese explorers who, in addition to looking for a way around Africa to the East, were also hoping to make contact with Prester John as a Christian ally.  A local philanthropist paid for the monument which was unveiled by the Portuguese Ambassador to South Africa in 1986.
The story of Prester John is a mysterious one.  In some circles he was believed to be a descendant of the Three Wise Men, some believed he was a crusader-era Christian king based in Ethiopia or possibly a high-born Mongol from the time of Genghis Khan.  Then there were those who said that he watched over the Holy Grail, never growing old but wiser and wiser as the years went by.  Whoever this mythical king-priest Prester John was, it was the quest of the Portuguese explorers not just to find a sea route around Africa to the East, but to also find and make contact with Prester John as a Christian ally.
Prester John (Latin: Presbyter Johannes) is a legendary Christian patriarch and king popular in European chronicles and tradition from the 12th through the 17th centuries. He was said to rule over a Nestorian (Church of the East) Christian nation lost amid the Muslims and pagans of the Orient, in which the Patriarch of the Saint Thomas Christians resided. The accounts are varied collections of medieval popular fantasy, depicting Prester John as a descendant of the Three Magi, ruling a kingdom full of riches, marvels, and strange creatures.
At first, Prester John was imagined to reside in India; tales of the Nestorian Christians’ evangelistic success there and of Thomas the Apostle’s subcontinental travels as documented in works like the Acts of Thomas probably provided the first seeds of the legend. After the coming of the Mongols to the Western world, accounts placed the king in Central Asia, and eventually Portuguese explorers convinced themselves that they had found him in Ethiopia.
You can read more about Prester John on Wikipedia where I got the above information. 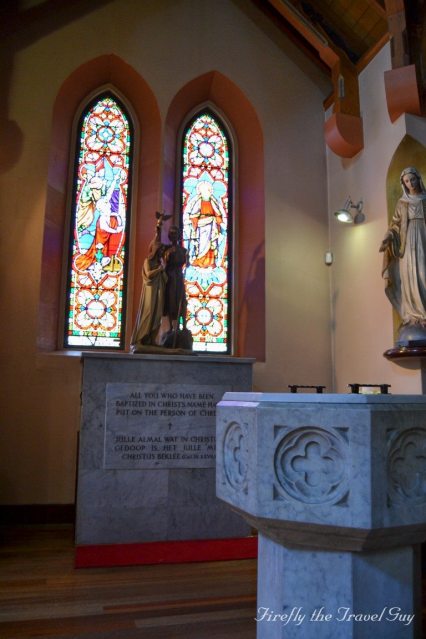 Imagine my surprise when I found an Afrikaans inscription on a plaque behind the baptismal font in the St Augustine’s Catholic Cathedral. Very unusual.