The harbour giraffes seen across Kings Beach just after sunset.

To tell the truth, they really look like they came straight off the silver screen from a Star Wars movie

Looking down onto the harbour from the Campanile observation deck, one just can’t help but wonder where in the world these cars are being exported to.

This is the last of the Campanile View trio of posts (There should have been four but it seems I never took a pic out the new big viewing window of the whole harbour).  Unfortunately the south viewing window doesn’t open like the north and west windows, probably because the new lift’s doors is right by the window.  Looking out the harbour dominates the foreground while the beachfront with all it’s recognisable landmarks are visible in the background.

One of the new features of the recently refurbished Campanile is a full-length viewing window on the harbour side of the tower.  The window has caused some ruptions with historic purists but personally I think its a great addition.  The window really gives the best view of the adjacent Port Elizabeth Harbour and all its activities.

We’ve never been to the fish shops on the harbour to buy fresh fish but a Saturday or two ago, in search of finding something else to make for dinner than just the usual stuff, we decided to go and have a look.  We landed up in Fisherman Fresh (throw a left as you enter the harbour at the Baakens entrance and follow the signs).  An amazing selection of fresh and frozen fish and other seafoods and so much cheaper than our local supermarkets and the Fruit and Veg down the road from home. We ended up having a snoek braai that evening and tried gurnard rather than hake for a change. Definitely a winner in my book and I will be back for sure on a more regular basis for more.  The service and advise we received was also top notch so if you haven’t been and like to make your own fish, this is the place to go and buy it. 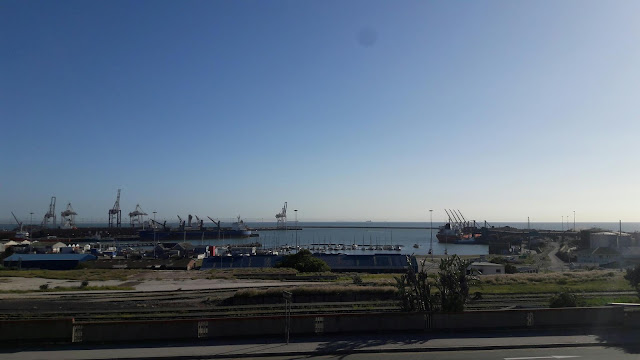 I had to stop at the Spar in Humerail this morning and stopped to admire the view of the harbour from the parking area.  Some people wouldn’t term this as a beautiful view but I like to call it an interesting view.  Unfortunately I didn’t have my camera so a cell phone photo will have to do.

It’s sad to think that the Baakens River mouth was once a big lagoon where passing ships came to collect fresh water for their voyages yet today it’s a cement canal under the Settlers Freeway which flows into the PE Harbour.  Some major revamping and restoration needed to give this river mouth any dignity again.
We all know the Baakens River flows through Port Elizabeth and that most of the Baakens Valley is protected green open spaces all the way from Sunridge Park, past the 3rd Avenue Dip, through Walmer and Mill Park to Settlres Park.  It really is a pity that the municipality doesn’t look after the well being of the river better and that the open spaces aren’t utilised as much as the potential it has, but it’s still a very special area.  I often wonder though how many people have never thought where the Baakens River Mouth is and didn’t realise that it actually flows into the Port Elizabeth Harbour.  After a lunch at This is Eat at the harbour the other day I remembered the two historic pictures below and that I still had to take a Now photo to post with them.  So here it is, Then and Now – Baakens River Bridge.

In 1851 the bridge across the Baakens River near the mouth was washed away and a new wooden one was built for pedestrians.  The road below for wagons simply took a dip through the river and up the other side.  The new bridge washed away in 1857 and the then replacement was damaged in 1867.  The roadway though was practically untouched.  This bridge was replaced after 1867, the road straightened and dip removed.

In 1892 the foundation stone was laid for the new Baakens Bridge.   The town council in partnership with the Harbour Board built a strong new bridge over the river.  In the following years several acres of the southern bank were reclaimed by the Harbour Board, narrowing the river even further while a concrete wall was built along the river banks.  In 1913 the ratepayers accepted a scheme to widen and improve the channel at the mouth of the river and to a new bridge to provide a proper outlet in case of future floods.  The original plan was to build a steel bridge to replace the cast iron one but the war interfered with their plans to buy suitable steel and in 1916 it was decided to rather use reinforced concrete.  The plans had to be set aside though and only once the war was over did things move on the project again.  The bridge was finally completed in June of 1922.

This is what the mouth of the Baakens River looks like today at low tide.  Two bridges below, one going towards town where the original bridge use to be and one going towards Humewood plus the Settlers Freeway overhead.  The Tramways Building is visible in the background of both the second as well as the last photo.  For most this will probably be just a bunch of useless history about a bridge, but the one thing that is clear is that this river mouth has seen a lot of bridges (and flooding) over the years.

The historic information in this post was sourced from Margaret Harradine’s excellent book, Port Elizabeth, A social chronicle to the end of 1945.

Have you ever had lunch at This is Eat at the harbour?  Not? You’re only missing the best takeaway fish and calamari at the best prices in town.  Last week we had a quick lunch time Geocaching event at the restaurant and as I’m on diet I had to sit and watch my friends eat. I was very tempted though…