We always say that we have to look at the bigger picture and not just be narrow minded and get stuck in the same rut over and over.  When you travel though you should really pry your eyes away from a bigger picture at times and look for the little things as well.  Travelling up to the Drakensberg we spent two nights in Matatiele in the North Eastern Cape and went to have a look at the Matatiele Mountain Lake in the mountains above town.  An absolutely stunning but hidden beauty.  While the Damselfly and KidZ were admiring the surroundings I was looking for interesting angles to photograph it from and while getting down on my haunches between some rocks I came across a spider’s pantry.  Didn’t see the spider though but made sure I wasn’t hanging around when he got hungry. 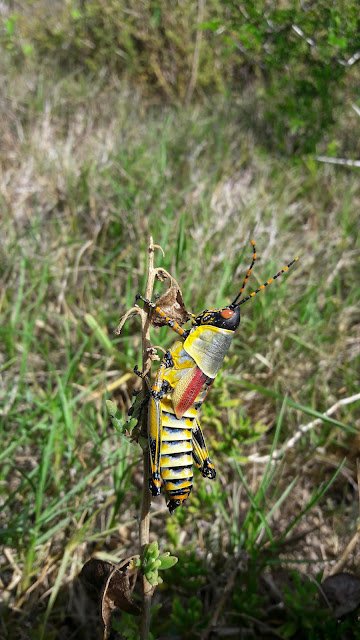 So how high does one jump when you’re walking around in the grass looking at the horizon and see movement from the corner of your eye to find about 10 of these colourful Elegant Grasshoppers all around your legs.  In my case pretty high as I did taking some photos with my phone in the Coega area.  Sorry I didn’t have my camera to get a better picture though.

My yard seems to be a bit of a magnet for paper wasps (South African Paper Wasp – Polistes marginalis) with about three or four nests all around the house.  I know a couple of Geocachers who would be able to tell you all about the fact that unlike honey bees that only sting once, the paper wasp can inflict multiple stings.  The nest is built by a queen who lays the first eggs.  As these hatch and grow up the females join the queen on building onto and tending the nest.  Usually they are very docile but they will attack if threatened.  Or perceived to be threatened like when I passed a nest the other day with the lawnmower and they decided to shoo me away.  Bang bang bang, two on the arm and one on the neck.

Even though I am known as Firefly, the Dragonfly must be my favorite insect.  A long weekend at Sitrusoewer next to the Sundays River near Kirkwood had me spending a lot of time on the water in a canoe and I was amazed at seeing how many dragonflies and damselflies there were.  I got this picture of a Red Dragonfly and decided to see if I can find out what it is called.  I never really found the answer to my question.  I did find this out.  There are in the region of 750 species of dragonfly in the whole of Africa.  Most of these are found in the tropics.  In South Africa there are 158 species, 90 of these being ‘true’ dragonflies and the other 68 damselflies.

Usually I post about places or buildings or monuments.  Today I’m posting a spider.  A golden orb web spider I encountered in a wild fig tree in Uitenhage.

A little caching adventure in Uitenhage brought us to Cannon Hill overlooking the town.  Walking back down the path Drama Princess gave a bit of a scream and jumped onto the grass.  There on the path was a couple of seriously big ants making their way up the hill.  I tried to get a close up but wasn’t going to mess with this guys.

One of the beauties of travelling is exploring and discovering new places and things.  I dropped my mom off in Despatch after a visit and swung through town to pick up a Geocache I hadn’t ticked off my list.  I parked next to a couple of Coral Trees (Lucky Bean Trees as some people know them) and on my way back to the car noticed a whole bunch of snails on one of the trees.  And when I say a whole bunch I don’t mean like 10 or 20.  There were literally hundreds.  On closer inspection I saw them on all the trees along the road but I selected the one with the most and grabbed my camera.

I’ve been sitting with these pics for a while now and posted one of them on my Facebook Page.  The pic got a lot of reaction and somebody asked why they do that.  Going back to the day I saw this, I noticed that non of them were moving.  It was as if they were dead.  A snail cemetery perhaps.  Pulling one or two of them off they had a film across the hole of the shell and the snail was still inside.  Peculiar.  So this morning I decided to consult my good friend Google.  It took some time but finally I found out that some snails go into hibernation, specially during colder months and very dry periods.  Not sure which one of the two was the cause of this mass hibernation as it was a dry winter.  Both perhaps but regardless, always nice to discover and learn something new.

I got the following information off Snail World:

Some snails Hibernate.
Some species of snails actually hibernate during the colder months of the year. They cover their bodies with a thin layer of mucus, which prevents them from drying out. Sometimes snails are also able to hibernate in the summer to survive if they are faced with a severe drought. They live off of the stored up fat during this time of year. This process is one of the many reasons why they have been able to survive for million years.

A Geocaching outing last weekend yielded more than just a cache container.  It also resulted in an inspection and photo session of what turned out to be Pine Tree Emperor Moth larvae or commonly known as a Christmas Caterpillar.  This guy is probably the size of my index finger so I really wouldn”t want them getting into my garden.  In case you wondered where we saw it.  This one was somewhere along the Sardinia Bay road although I’ve also seen them on the Fynbos Trail at Schoenies.

The flightless dung beetle used to be found widespread in Southern Africa but these days is classified as a vulnerable species and only found in Addo Elephant National Park and a couple of other isolated spots.  The beetle is strictly dependent on a number of vertebrates (particularly elephant and buffalo) and when these animals were shot out at the end of the 1800’s and beginning 1900’s the poor dung beetle population took a huge knock.  These days things are slowly getting better and better for them with the increase and spreading of the elephant population in Addo and the surrounding reserves.