Port Elizabeth and Algoa Bay are promoted as the Bottlenose Dolphin capital of the world while St Croix Island has the biggest population of African Penguins in the world. I was lucky to get both species in one photo at St Croix on an outing with Raggy Charters a little while ago.

For more information – Bottlenose Dolphion Capital of the World

African Penguins – About 60% of the total global population of the endangered African Penguins live in Algoa Bay, 21 000 on St Croix, and 5 700 on Bird Island. Strange enough there isn’t a mainland population in the Eastern Cape and they only occur on the islands. 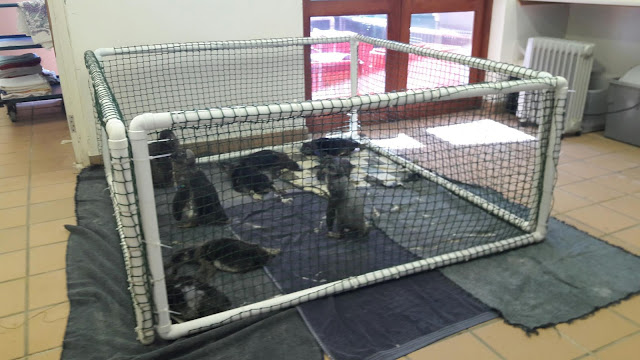 While scouting spots as stops for Miggie’s Amazing Race for this past Saturday I popped into SAMREC.  I haven’t been for a while and had a quick walk around the centre with Keith, one of the guides.  He told me they had a lot of babies in at the moment and I got to peek into the hospital section.  They were lying around and for a moment I thought they were really sick until Keith told me they just ate and were sleeping.  “Magies vol, ogies toe.”  As I couldn’t go and to get a closeup pic I just stuck my arm in and snapped this photo with my phone.  I’ll drop by again soon to see how they are doing.
Algoa Bay is one of six marine Hope Spots proclaimed along the South African coastline.  Although the Algoa Bay Hope Spots covers the whole diverse marine ecology of the bay it focuses on the African Penguin.  The other South African Hope Spots are  False Bay, Cape Whale Coast, Knysna, Plettenberg Bay and the Aliwal Shoal.  Check out this awesome mini documentary on the Hope Spot and learn more about the penguins and other inhabitants of Algoa Bay.
On 25 April we celebrated World Penguin Day. Here in Algoa Bay we are very fortunate to have the biggest breeding colony of African Penguins on St Croix Island.  But we’re not just fortunate to have them here, we are thus also aware of the desperate plight of the African Penguin.  Penguin numbers have plummeted since the 1980’s with only around 18000 breeding pares left out in the wild.  As a belated celebration of World Penguin Day, I’m posting this rather awesome video by Volkswagen and the Dyer Island Conservation Trust.  It may not have been shot here in Algoa Bay, but it could just as well have been and have a lot of relevance to our penguins as well.

The residents of the penguin pool at SAMREC having their morning sun worship.  Notice how it’s not just penguins residing in the penguin pool. There’s also a gannet on the right and a cormorant in the back.
The African Penguin used to be called the Jackass Penguin.  A strange name for a penguin.  But how did it get that name? It is because the African Penguin’s call sounds like a braying donkey.  Right, so now we have established that they sound like a donkey, but why were they called Jackass?  Donkey’s are also called Asses (the scientific name is Equus africanus Asinus) while a male donkey is called a Jack.  Hence Jackass.  Check out this video by Hanging Out With Ryan of the penguins braying at SAMREC and tell me that doesn’t sound like a donkey.

I just can’t help but laugh every time I watch the penguins at SAMREC and one of them wants to jump off the diving board.  They literally look like they are scanning the water for sharks before they dive in.

Early morning and late afternoon visitors to SAMREC in Cape Recife will be lucky enough to see how the penguins are fed as part of their tour.  The guide explained the whole feeding process to us.  As it turns out its not just a case of stuffing a couple of fish down their throats.  Every fish that is given to a penguin is recorded and placed on their personal files.  Some of the little guys have to still get medication as well with tablets hidden inside certain fish so the records are checked and each one only gets what he is supposed to get.  After eating its time to head over to the pool for a morning swim after spending the night in their sleeping enclosure.

Before a penguin gets all decked out in his black and white tuxedo he wears a greyish onesie.  At SAMREC they currently have a number of little greys they are caring for.  A week or so ago I was at SAMREC early one morning and they were busy feeding the penguins before they were taken to the pool outside.  This little guy was the last in line and had to get some medication so he became the focus of the paparazzi while the “nurse” prepped his meds.
https://youtube.googleapis.com/v/vjJtGua3GE8&source=uds
I can’t say enough how good a job the guys at SAMREC does when it comes to penguin conservation and caring for penguins found on our beaches.  Once the birds have gone through the rehabilitation process at the centre in the Cape Recife Nature Reserve they get released back into Algoa Bay to make their way back to their home on the islands in the bay.  The penguins don’t get released on their own and when there are a couple ready to go they normally invite the public to come and watch the release.  This is all about creating awareness of these threatened sea birds.  For this week’s Friday video I came across this one of a penguin release filmed by a member of the public some time in 2013.