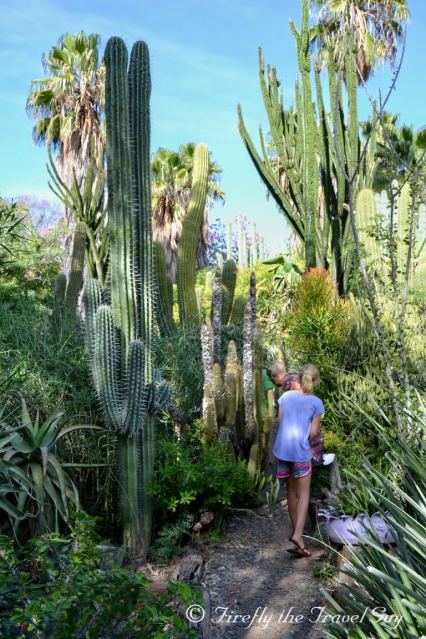 I have always had a love for cacti and succulents.  Perhaps because there are so many different species, because they often surprise you with the most beautiful little flowers or because they don’t need much looking after or water.  But nothing I knew about succulents could prepare me for what I encountered at the Obesa Cactus Nursery in Graaff-Reinet.  We were in town for a long weekend and had a couple of hours on our hands to explore, so when the receptionist at the guesthouse we were staying recommended Obesa I knew we were in for a prickly experience.

Coming around the corner it’s hard to miss Obesa.  The succulents are all over… the yard… the building… the fence… along the pavement…  It’s really hard to miss.  So is the sign on the gate stating that American visitors aren’t welcome.  Clearly the owner isn’t a Donald Trump fan.  So if you’re a Yank looking to stop by, just don’t say much.
Obesa was started in 1970 as a hobby garden, grew up and then went into overdrive.  Today it boasts over 7 000 species of plants, raises 35 000 odd plants every year, and stocks well over 2 million.  Definitely not quite just a hobby anymore.  Chatting to owner Johan he was telling me that most of their succulents are exported with the majority going to Europe.  Obesa is basically made up of two sections.  Firstly there is the garden and then the nursery. 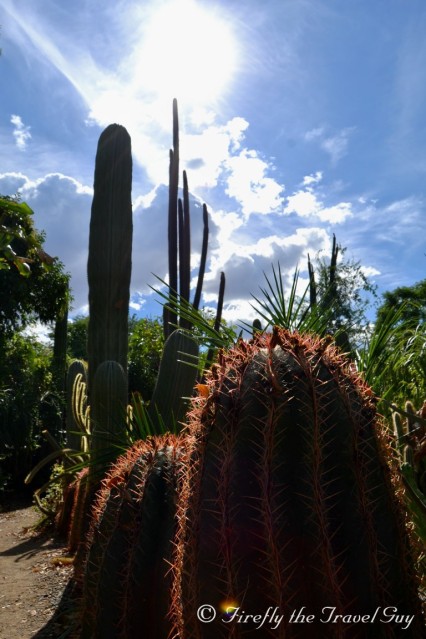 It was in the garden where we kicked off our visit.  Johan pointed us in the general direction and from there we followed the paths and signs.  It’s in this garden where cactii growing up to around 8 meters high will take your breath away.  Definitely not your typical succulent garden at home.  I didn’t know where to point my camera.  Problem is showing the scale of these plants, some of which is up to 45 years old already.  I did try a couple of times to get Miggie to stand by them for scale but she was a bit careful for those big thorns reaching out at her.

The nursery itself is huge and if you’re a succulent lover then you better come with you wallet well stocked otherwise don’t even go there.  With us it was a case of “I want one of those, and one of those, one of those and definitely one of those…”  And anything you need to know, just ask Johan.  He does come across as very direct and not everybody likes that, but the man knows his succulents.  That is for sure.
Graaff-Reinet has so many treasures to discover ranging from the Valley of Desolation to the many museums in town, but do open up an hour or so in your itinerary and pop by Obesa.  It’s perhaps not everybody’s thing, but if you like to garden, it will be worth it. 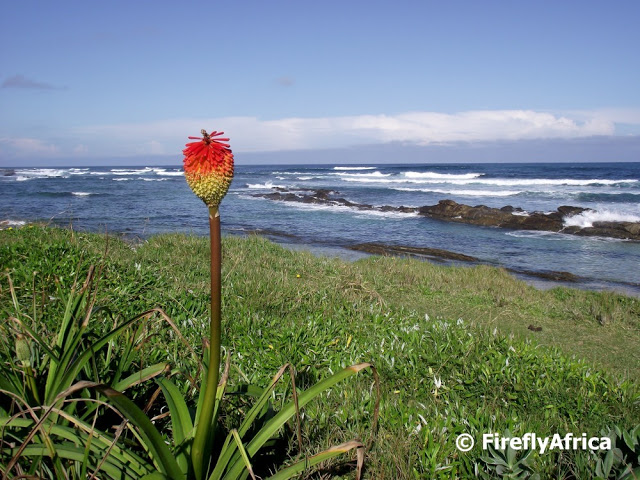 The Latin name for the Red Hot Poker is Kniphofia and its also sometimes known as a Torch lily or Poker plant.  According to Wikipedia, it is a genus of plants in the family Xanthorrhoeaceae, subfamily Asphodeloideae, that includes 70 or more species native to Africa.  This specific one I found close to Schoenies. 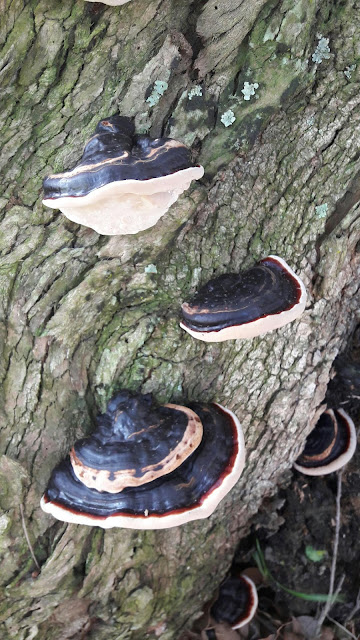 On my way home this afternoon I stopped to pick up a few Geocaches and at one of the cache locations on Kragga Kamma Road I found this very distinctive bracket fungus growing on the back of the tree.
Polypores are a group of fungi that form fruiting bodies with pores or tubes on the underside and is also called bracket or shelf fungi.  Their woody fruiting bodies are called conks and they inhabit tree trunks or branches consuming the wood.  They are the most important agents of wood decay and play a very significant role in nutrient cycling and carbon dioxide production of forest ecosystems.  Over one thousand polypore species have been described to science although a large part of the diversity is still unknown.  I have seen a lot of different types of bracket fungus ranging from bright orange to brown, yellow, cream and white, but this is the first time I’ve seen this specific one with the black on top.  A find for me just as significant as the Geocache located below them. 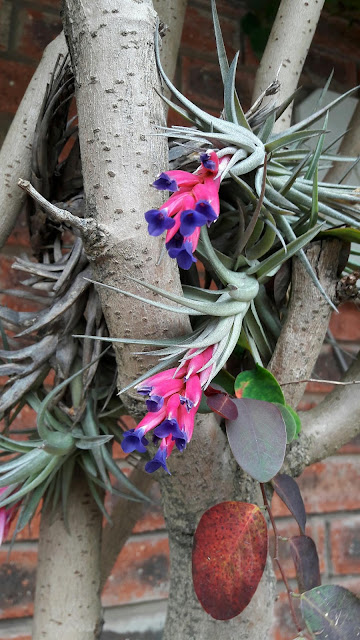 I don’t have big flowerbeds in my garden.  For that I just don’t have enough time and green enough fingers.  I do have a few different plants and lots of succulents though and one of those I probably get most excited about when they flower is my air plants.   Air plants (Tillandsia) is a member of the Bromeliad family and is actually very easy to grow.  They don’t need soil and you only need to water them slightly (like in with a spray bottle).  You can keep them both inside (in a well lit area) and outside although they don’t always like to be in full sunlight all the time.  I have two types of air plants in my garden. The type in the picture flowers every year while the other type makes big clumps yet doesn’t really flower other than a single light purple flower and not even every year. 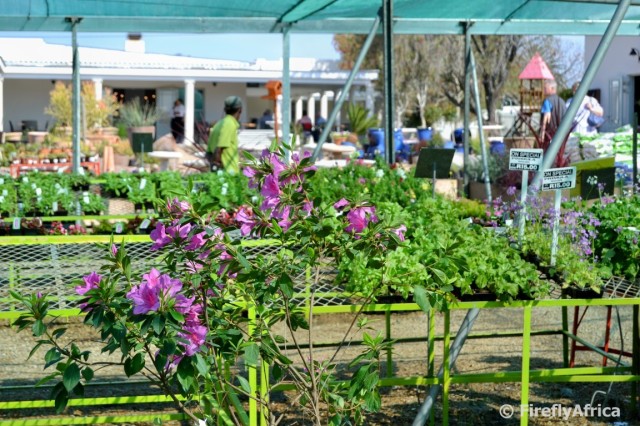 The Floradale Nursery that used to be on William Moffet recently moved into their new bigger and better premises on Circular Drive.  We stopped by for a look last weekend and wasn’t disappointed.  In addition to a bigger shop and expansive outside display area of plants, pots, ornaments and other garden accessories, the popular The Rose Garden coffee shop also has a new space with both inside and outside seating.
Just for interest sake, Floradale is one of the oldest garden centres in South Africa and was established in East London in 1937. 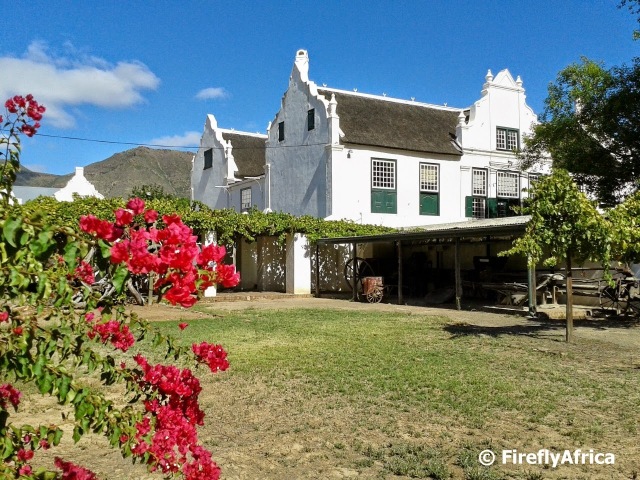 I really enjoy visiting small town museums.  There is always something interesting to discover in them and no better way to learn more about the history of a place.  Graaff-Reinet has a number of very good small museums but if I had to choose only one to go to I would﻿ choose Reinet House. The Graaff-Reinet Museum or “Reinet House” is a former Dutch Reformed Church parsonage and was built in 1812.  It was the home of three ministers prior to 1822, the year in which the Rev. Andrew Murray, from Aberdeenshire, Scotland, became the resident minister.  After his death in 1866 the parsonage was occupied by his son Charles until 1904 after which it was used as a boarding establishment for girls wishing to train as teachers.  It was during this time that the late Miss Helen Murray, a sister of Rev. Charles Murray, named the house “Reinet House”.  In 1956 the Graaff-Reinet Museum was officially opened. 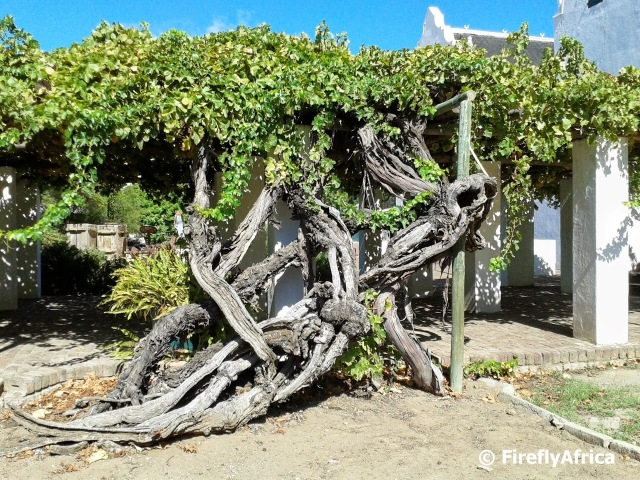 Not all the interesting objects can be found inside the museum though.  In the backyard is a Black Acorn grapevine planted by Charles Murray in 1870 which is said to be the oldest living grape vine in South Africa.  The “trunk” of the vine used to be a lot bigger than now but some years ago a big part of it had to be cut away when it picked up a disease.  It may have lost some of its girth but at least it didn’t die and will hopefully be around for many years to come.

The Tsitsikamma is famous for its stunning scenery, magnificent forests and exciting adventures.  I often wonder how many people visit here and marvel at the big things but totally miss the little ones.  Ferns with new leaves opening up, soft moss growing on a rock, bracket fungus on the side of a log, the sound of a forest stream slowly flowing through the underbrush and over a little waterfall and the call of baboons in the distance.  What about the sound of the wind in the trees, the breaking of a branch falling down, the smell of the moist forest and the red flash of a Knysna Loerie overhead followed by it’s ko-ko-ko call.  Suddenly I yearn to be in the forest, somewhere I go to feed my soul and always leave behind a piece of my heart.

Carpobrotus deliciosus (sour fig, perdevy, ghaukum, ghounavy ) is a fairly well know sight in this area.  They have purple, pink or white flowers, almost straight, green leaves and sweet fruits that make excellent sour fig preserve.  They grows on sand dunes and in rocky grassland along the southern and eastern coast of South Africa from Riversdale in the Western Cape through the Eastern Cape to KwaZulu-Natal.  This one was photographed in The Island Nature Reserve west of Port Elizabeth. 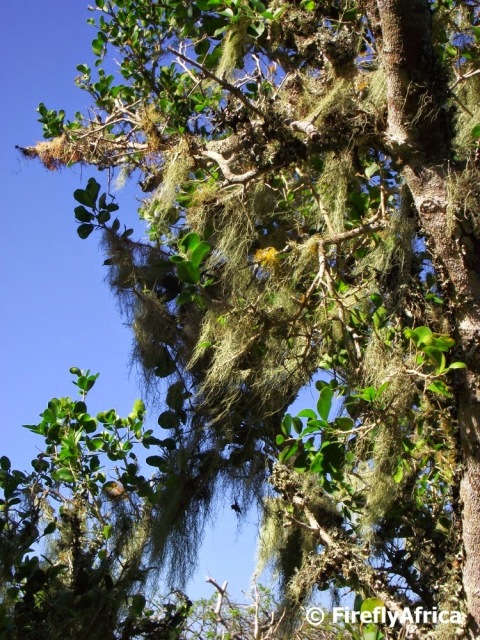 I’m sure most people have seen the lichen generally referred to as Old Man’s Beard.  One sees quite a lot of it in the Tsitsikamma forest, but in this case I found it on the Bushbuck Trail in The Island Nature Reserve.  Usnea is the generic and scientific name for several species of fruticose lichen in the family Parmeliaceae, that generally grow hanging from tree branches and resembling grey or greenish hair.  It is often referred to as Old Man’s Beard, but also called Beard Lichen, Tree’s Dandruff, Woman’s Long Hair, or Tree Moss.  Usnea grows all over the world and like other lichens it is a symbiosis of a fungus and an alga.
Like other lichens, Old Man’s Beard often grows on sick or dying trees due to the pre-existing loss of canopy leaves, allowing for greater photosynthesis by the lichen’s algae.  It is very sensitive to air pollution, especially sulfur dioxide so if you see it you know that the air is clean and pure.  Where the air is unpolluted, they can grow to 10–20 cm long.

I think the one thing in my mother’s garden that always fascinated me was her air plants.  They used to hang in a rubber tree close to the front gate and once a year these grey spikey looking plants that doesn’t grow from the ground got the most beautiful pink and blue flowers.  When my mom sold her house she gave all her air plants to me and I now have them all over my garden.  This time of year they are stunning and it still amazes me how something that doesn’t grow from the ground and doesn’t get watered regularly can bloom such beautiful flowers.