It is sad to see all the unused railway infrastructure around Port Elizabeth either on the harbour, around Humewood or next to the Settlers Freeway.  After a lunchtime event at This is Eat on the harbour I grabbed the camera for a couple of photos before heading back to the office.

The last couple of months have been a bit on the dry side and after the previous weekend’s rain it seems that the weather has suddenly discovered some more moisture to share with us.  Over the last 48 hours we’ve had some good rains in and around Port Elizabeth with apparently more to come in the next day or so.  I know its not the most exciting picture but here is one I snapped while sitting in wet traffic this morning.  Wet traffic being the type where people forget how to drive, either going like hooligans or driving like grannies (no offense to grannies) and a normal 20 minute drive to work this morning took me an hour.

In 1488 the Portuguese explorer Batholomeu Dias sailed into Algoa Bay and landed on St Croix island
where his crew celebrated Mass and planted a padrão or stone cross.  The island, which is visible from the Port Elizabeth beachfront, is 3.9 km from the nearest land at Hougham Park and rises up to 59m at it’s highest point.  It is 12 ha in size and is 700 meters long at its longest point and 360m wide at its broadest.  There is very little vegetation on this rocky island which is also home to the biggest breeding colony of African Penguins in the world.

Kings Beach is a beautiful piece of white sandy beach stretching from the harbour wall up to McArthur Pool.  With the royal visit to South Africa in 1947 the royal family also stopped in Port Elizabeth.  The train they were travelling on was parked just above what is now the Kings Beach parking area and apparently part of the beach was fenced of for the use of the royal family.  The princesses went horse riding and the king went for swims in the sea.  This meant that the locals started calling it the King’s beach and hence the name Kings Beach.  The picture was taken from the harbour wall looking back towards Humewood.

The mouth of the Swartkops River seen from the Bluewater Bay side.  The factory on the right is the Algorex carbon black plant while the Nelson Mandela Bay Stadium is visible on the left.

Over the weekend there was a national kite surfing competition that took place in blistering conditions at Bluewater Bay on the eastern side of Port Elizabeth.  It was a stunning site seeing all the kits bulging in the wind with the city in the background. 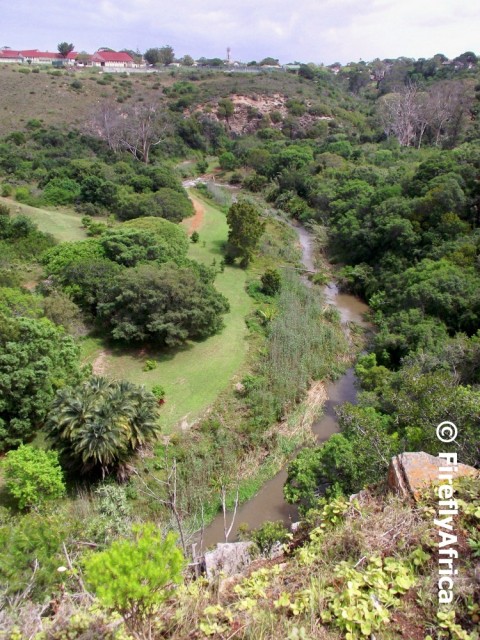 The Baakens River flowing through Settlers Park. The picture was taken from the park’s How Avenue parking area.

I live fairly close to the narrow guage line that is used by the Apple Express and can normally hear it when it goes by on a Saturday morning. The historic Apple Express narrow gauge train offers day trips to Loerie as well as 3 day trips to Kareedouw in the Langkloof. Construction on this historic line commenced in 1902 and was done to connect the scenic Langkloof with its fruit growing industry to the port of Port Elizabeth. As it was used to transport apples to Port Elizabeth, the train got known as the Apple Express. The line runs over the Van Stadens Bridge, the highest narrow gauge railway bridge in the world. The Apple Express is famous for being pulled by a steam train, although a diesel locomotive is used should the fire danger risk be high due to hot, dry or windy weather.

In 1971 the Port Elizabeth Shakespearean Festival requested that a open air theatre be developed in St Georges Park and this request was approved by the city’s Parks and Recreation Committee. The driving force behind this was Bruce and Helen Mann, doyens of the theatre in PE. The theatre comprises a stage and grassed area with grassed tiers where seats are placed.
It is utilised by the Port Elizabeth Shakespearean Festival which stage their annual Shakespear play there, but is open to anybody wanting to hire the venue for an event. 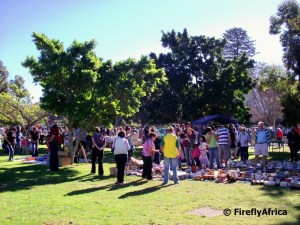 Gavin Tonks said …
“I actually started Art in The Park in 1977 with the Autum festival which ran for one week and it was only under the old St Georges Cricket stand pavilion, it proved popular and we did it again the following year.

I had to get special permission to trade on a Sunday and we put it under the auspices of the EPFSA Eastern province Fine Art Society and the then treasure Jerry Boulton.

I managed to get permission to run it on the First Sunday of the month which was my slogan , as it was too complicated to put up dates.

I started it with 5 crafters, pebble people, a macrame person [think it was Mrs Shepard], a potter Mrs Zeelie,Mrs Deysel who crocheted spanish dolls and a toy maker renet Bray I think was her name plus the art and craft stuff I brought along, and my accountant Edna Williams who did the books and made sure everyone was paid.

It grew over the years and many people earned a living from the Park and gave up full time employment as they only needed the one sale day to generate sufficient income, [between the 80s to the 90s]

There was much controversy the traders who came later had as much right to sell as it came down to what people bought as no sales, the person did not come back so the very people of PE made the park what it is or was.

There was a City Councilor at the time and the City Parks director and Clayton Halliday who supported me on the venture and assisted me to get the permits and stuff to trade,I was 18 at the time and enjoyed wonderful support from the Editor of the Herald and the other Old Newspapers the Weekend Post and the Evening Post and the Afrikaans daily as well.His name also eludes me but they all got behind me to make it happen.

It took almost 3 years to get the project up and running and another 2 years before it became entrenched as a Sunday outing where half of PE would come and see what was going on.

Many people had an affordable way to sell their goods I think the first months I charged R10.00 a day for the stall, and all the money went to the EPFSA plus I instituted a bursary scheme from the profits as part of the deal with them., I do not know how many students have benefited from it, as I left the association and the Park because I actually never made a cent out of my creation.”