How beautiful is that sky at Sardinia Bay? 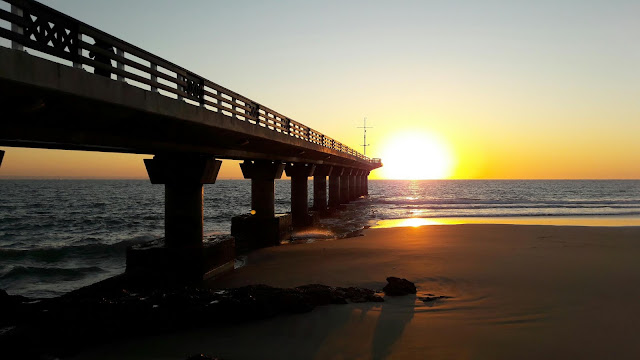 Three Karoo Heartland icons, all in one picture.
Big open sky, Karoo koppies (in this case Koffiebus and Teebus outside Steynsburg) and the good ol’ reliable Windpomp.

I have come to love the wide open spaces of the Karoo Heartland in the Eastern Cape but just haven’t been able to get used to the, what we call in Afrikaans, Vrystaatse vlaktes.  Vrystaat is the Afrikaans name for the Free State, South Africa’s central province while vlaktes is an very descriptive Afrikaans work for wide open spaces stretching for miles.  The wide open spaces, or vlaktes, of the Free State is very different from that of the Karoo Heartland.  Driving along the roads of the central and southern Free State you often feel like you are in the middle of nowhere where nothing grows about knee high.  I’m not insulting the Free State, please don’t get me wrong.  I’m just saying that, like with wine, I just haven’t been able to get used to it.  I found the most beautiful Afrikaans poem called the Vrystaatse Vlaktes in die Somer just to make up for it in case somebody feels insulted.
The picture was taken just off the N1 in the southern Free State about 50 kilometers north of the Gariep Dam.
I haven’t participated in Skywatch Friday for a very long time and I think it’s time I start sharing our beautiful South African skies on a regular basis on it again.

The Karoo is known as blue sky country.  That means when the thunder clouds start to pack together after a hot day there is lots of sky to watch the approaching storm in.  Like this one I witnessed just after leaving Cradock on my way back to Port Elizabeth.  I can just smell the drops splashing down on the hot tar road again.  Its one of my five favorite smells along with the smell of cut grass, fresh bread, the ocean and a damp forest.  What’s you favorite smell?

2013 is on its last leg and nearly over so I thought a sunset over the city seen from the Port Elizabeth Harbour is the perfect last photo for the year.  If you’re going out tonight please take it easy and be safe.  See you all next year.

Usually you would see a chicken, and in particular one who doesn’t lay eggs, on top of a church spire.  Every now and then you do encounter a different one and that was the case with this angel weather vane on top of the Dutch Reformed Church in Robertson in the Western Cape.
Visit Skywatch for some more neck cranking pictures of the sky from all over the world

The Mackay Bridge in Colchester outside Port Elizabeth silhouetted against the afternoon sun, ideal for a Skywatch Friday post.

I have seen stunning photos of the Nelson Mandela Bay Stadium with some of the best interior ones being taken from the top tow of seats right in the very corner.  So late last year during the IRB 7’s I decided to venture up into the nose bleed section and get my own photo.  Mmmmm…. Quite clearly the stunning pics I’ve seen were taken with a SLR with wide angle lens.  Both of which I don’t have.  So for now I have to be happy with the pic I got. Maybe one day…