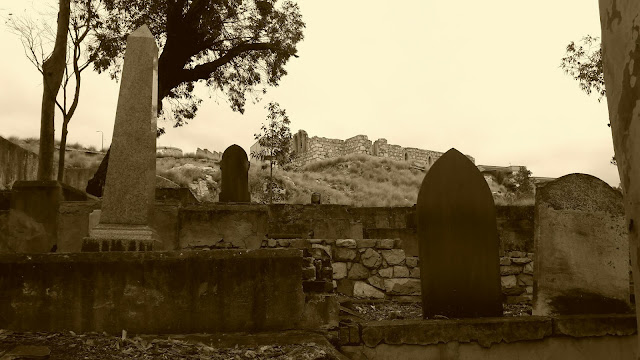 St Mary’s Cemetery at the bottom of the Baakens Valley dates back to as early as 1799 when it was a military cemetery.  This changed with the arrival of the 1820 British Settlers and you can still find graves of some of the original Settlers in the grave yard.  On the hill above the cemetery stands the ruins of the St Peter’s Church.  The church was built in 1877 and after the people of South End were forcibly removed in the mid 1960’s, the church was demolished to stop the congregation from returning to worship there. 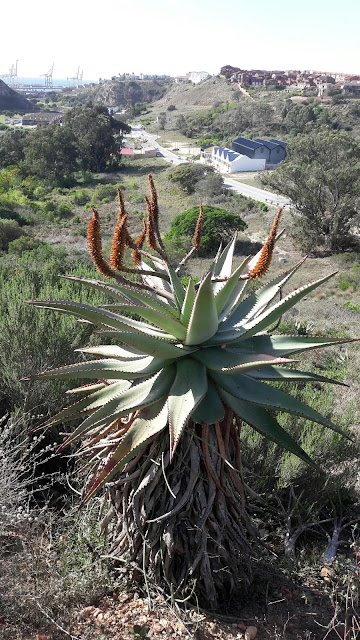 I was out on a recce at lunch time today for this Saturday’s Amazing Race I’m organising and ended up looking down the Baakens Valley from the Walmer side.  For those who aren’t sure where this is, that is Upper Valley Road leading down towards Bridge Street with the harbour giraffes in the background.

Probably the biggest maritime disaster that ever took place on the Port Elizabeth coastline happened way back during the Great Gale of 1902.  On Sunday, 31 August 1902 there were 38 ships at anchor along the then North End Beach.  Rain and a south-easterly wind started to lash the bay and by midnight the storm turned into a hurricane.  By the end of the storm on 2 September 1902, 18 of the ships had been stranded on the beach, while the rest all had major damage.  The dead were buried in the South End Cemetery and thousands lined the route to the cemetery as the funeral processions went by with surviving ship-mates carrying the coffins of those that died during the storm.  A memorial stands in the South End Cemetery with all the names of those who died during the storm.

Behind the South End Cemetery is an old footbridge over the narrow gauge railway line which most people probably have never seen.  It’s not really something significant but I know of it because I have a Geocache hidden there.  I went to check up on it the other day after the recent fire and snapped this pic.

I stopped by the South End Cemetery last week to check up on my Geocaches in the area and took a slow drive around the cemetery.  It’s really sad to see how much vandalism has taken place in the cemetery.  Pity the municipality can’t put aside a bit of budget to restore a lot of these pushed over and broken historic grave stones.  Anyhow, I was looking for an interesting angle to photograph and settled on this one, converted to sepia.

The newly restored Tramways Building reflecting in the Baakens River.  Truly an old yet new landmark in Port Elizabeth.  Can you see Fort Frederick on the hill in the background?

It’s sad to think that the Baakens River mouth was once a big lagoon where passing ships came to collect fresh water for their voyages yet today it’s a cement canal under the Settlers Freeway which flows into the PE Harbour.  Some major revamping and restoration needed to give this river mouth any dignity again.

Yesterday I posted a photo of the St Mary’s Cemetery along with the grave yard’s history.  I decided to follow it up with another photo of the cemetery but from a totally different angle.  This one is standing at the bottom and looking away from the road and up the terraces.

I got to attend Nelson Mandela Bay Tourism’s launch of Tourism Month at the newly refurbished Tramways Buildings a week or two ago and had some time on my hands before the event began so went for a walk through St Mary’s Cemetery.  It’s really sad to see the state the cemetery is in specially seeing the historic value and position it has.  I went scratching for the history around the cemetery and this is what I cam up with.
In 1799 when Fort Frederick was being built, the military authorities laid out a burial ground to the south of the Baakens River.  After the foundation of the town which was to become Port Elizabeth, civilian burials appear to have taken place on a site to the north of the settlement.  After the arrival of the 1820 British Settlers which brought an influx of people into the town, arrangements were made for civilians to share the military cemetery.  Control of the cemetery was assigned to the colonial state church, the Church of England, in the charge of St Mary’s Collegiate Church, and for several years also accommodated other Christian denominations within its walls.  The one major group which could not be included was the Cape Malay community, whose members were Moslems.  Thus adjacent to the Anglican cemetery a separate Muslem cemetery was laid out with a orientation facing Mecca.  The precedent for the separation of place of worship from place of burial once established, was to be followed virtually throughout the city’s history.

The growth of the town and the diverse religious affiliations of the inhabitants were such that increased demands were placed upon St Mary’s Cemetery. The solution was found in the allocation of small pieces of land on the town margins to accommodate the various Christian denominations.  In the late 1830’s and 1840’s the Wesleyan Methodists, Roman Catholics and Congregationalists were all granted their own burial grounds to the north-west of the settlement.

With the month of Ramadan starting today, I thought it would be appropriate to do a Then and Now featuring the Masjied-Ul-Aziz (also known as the Pier Street Mosque or Green Mosque).  The mosque was officially opened in July 1901 and the first Imam was Abdul Wahab Salie .  The mosque was destined to be destroyed by the declaration of the Group Areas Act to make way for a freeway off ramp, but the matter went to the United Nations where Islamic countries prevented its destruction, but not before the minaret had been removed already and bulldozers stood waiting.

In the Now photo the extensions can be seen that has been added since it originally opened.  The minaret is also different from the original and you can clearly see why the mosque is referred to as the Green Mosque.
I also would like to take this opportunity to wish all our Muslim followers a joyous and blessed Ramadan.  Peace, love, joy and good health to you.