I’m sure most Port Elizabethans who grew up here would have played in the playpark at St George’s Park at one stage or another as a kid and would remember the oxen and wagon. I remember playing on it and so do my kids. After taking a walk around Art in the Park on Sunday, Miggie couldn’t wait to hop on just for the fun of it.

Art in the Park truly has been a part of Port Elizabeth’s being for much longer than I can even remember. 35 years ago I can remember my mom having a stall at Art in the Park and how we spent the whole day playing around St Georges Park and going through the stalls. The stalls stretched all the way from the entrance at the art museum past the pool to the first big trees and then down to the pay area and consisted just about exclusively of handmade items. But over the years the number of visitors deteriorated, people bought less hand made items and thus the number of stalls deteriorated. These days there are literally only a handful of hand-made item stalls, as many food stalls and the rest are made up of second-hand items and bric and brac stalls.

Regardless of this, it’s still really nice going to Art in the Park on the first Sunday of the month to stroll between the stalls and look for a bargain or something you didn’t know you needed (or actually did need). This past Sunday (7 March 2021) was another beautiful sunny and mostly windless Sunday morning and a very good excuse for an outing to Art in the Park. It may not be anywhere it used to be, but long live Art in the Park. 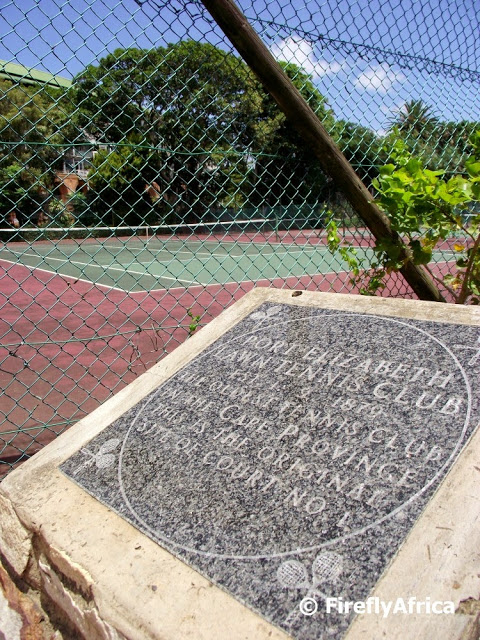 Did you know that the Port Elizabeth Lawn Tennis Club in St Georges Park was founded on 1 September 1879, making it the oldest active tennis club in South Africa?  The club hosted the first South African Lawn Tennis Championship in 1891 and today the club is still situated on its original site. 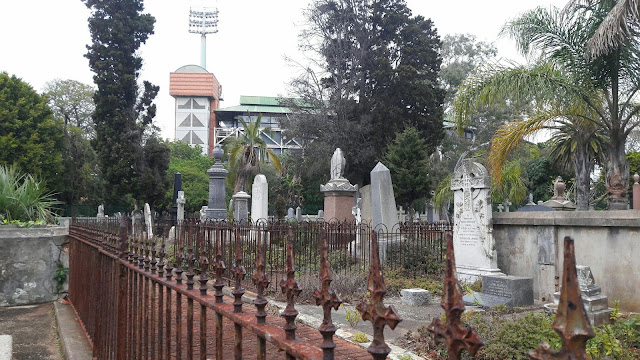 In the early days of Port Elizabeth the St Mary’s Cemetery was used, first by the military based at Fort Frederick, and later for civilians with the cemetery being under the control of St Mary’s Church.  As the town grew more burial areas were required by the various Christian denominations and in the 1830’s and 1840’s the various churches were granted small pieces of land adjacent to each other on the edge of town where Russell Road is today.  A further Nonconformist cemetery, mainly for the Church of Scotland, was also set aside in 1854 on the western edge of town, which was later incorporated into the extensive St George’s Park.
Last week I stopped by the Scottish Cemetery to collect some information needed for a Geocache I’m doing and was glad to see that the municipality has cleaned up most of the creeper plants that has been covering a big part of the cemetery.

The centre piece fountain of the Pearson Conservatory in St George’s Park was made by Andrew Handyside at the Duke Street Foundry “Britannia Iron Works” in Derby in the UK around the same year the Conservatory was built in 1882.

I took a walk through St George’s Park a week or so ago and along the way I wondered how many people actually know how old St George’s Park is.
St George’s Park was laid out and opened on 6 August 1861 to commemorate the visit of Prince Alfred, second son of Queen Victoria, to Port Elizabeth exactly one year earlier.
Flags and streamers were flying in every direction, all shops were shut, people dressed in holiday attire, and expectation stood on tiptoe. By a sort of instinct the Market Square (now Vuyisile Mini Square) seemed to be the centre of attraction. Here the naval brigade all dressed in blue and white stood mustered under Captain Chapman and Lieut. Wheatland. The worshipful concillors in ‘tails and gloves’ began to assemble at the Town Hall and looked most grave and dignified. Presently the band struck up and matched smartly down Main Street (now Govan Mbeki Avenue) and up Donkin Street past the Scotch Church. The concillors then proceeded to the Hill and by the time the brigade had reached the spot, a good crowd of people had assembled to witness the ceremony of planting the first tree in the newly-named St Georges Park. A fellow townsman, Mr Birt, had presented the Mayor with a young oak and this was to be the tree.
The Mayor, Mr William Smith, then explained to the assembled crowd the purpose of the meeting, after which he called upon Mr Pearson, the originator of the idea, to address those present. In brief, it was to the effect that for some time a public playground had been needed in Port Elizabeth and that the Mayor was about to plant the first tree in what it had been decided to name ‘Prince Alfred’s Grove’. In later years when people would assemble in St Georges Park they would point to the Prince’s Grove and say; ‘for that and for this spacious playground we are indebted to the foresight and kindness of a former Municipal body who commemorated the first anniversary of a Royal Prince’s visit in inaugurating for the comfort, health, and recreation of their fellow-townsmen for all time these shady walks and extensive beautifully laid-out grounds.’ After this, champagne was produced and amid a volley of popping corks and several repartees, healths innumerable were drunk, and success to St. Georges Park and to the Prince’s Grove pledged over and over again.
— Port Elizabeth in Bygone Days written by JJ Redgrave and published in 1947.

I just can’t get enough of the lines in the Pearson Conservatory in St George’s Park.
Great for photography.

A weekend or two ago we went for a photo shoot in St Georges Park.  No, I don’t mean I went to take photos in St Georges.  In February the Damselfly gave me a voucher for a couples shoot with Champayne Creations for Valentines Day and we were in St Georges to have our photos taken.  I’m not one who always like photos being taken of me, especially posed ones, but Lundi did an amazing job and the pics look stunning.  I did take my camera along to get a couple of snaps myself though. 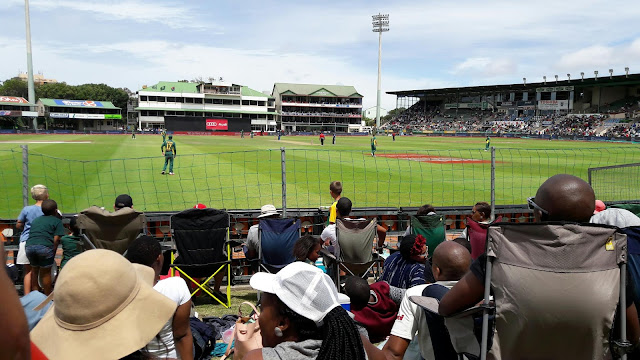 The first One Day International of the cricket series between South Africa and Sri Lanka took place here in Port Elizabeth today and I was there.  It’s been a while since I’ve been to an international cricket game and it was really a treat being able to go and enjoy it with Drama Princess.  Other than the fact that the South African’s totally dominates the day, the other thing that really caught my attention was how diverse the crowd was.  There was a time when cricket was seen as a white sport but today it was clear that those days are long gone.  This was even more evident when white boys stand next to the field shouting to try and get the attention of their new bowling hero Kagiso Rabada and black supporters chant “AB! AB! AB!” when AB de Villiers came in to bat.  All I can say is “I love this game”.  Now I need to go and administer some after sun to my legs… 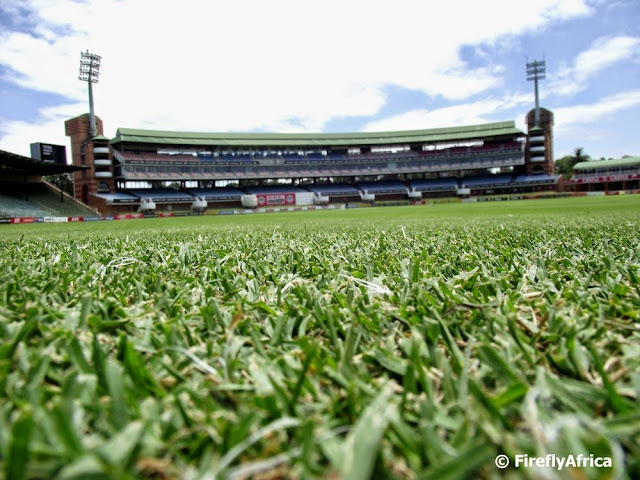 With the first ODI in the series between the Proteas and Sri Lanka taking place in Port Elizabeth this Saturday I thought it appropriate to post a photo featuring the hallowed green grass of St George’s with the Duckpond Pavilion in the background.  Hope the boys make the home crowd proud.