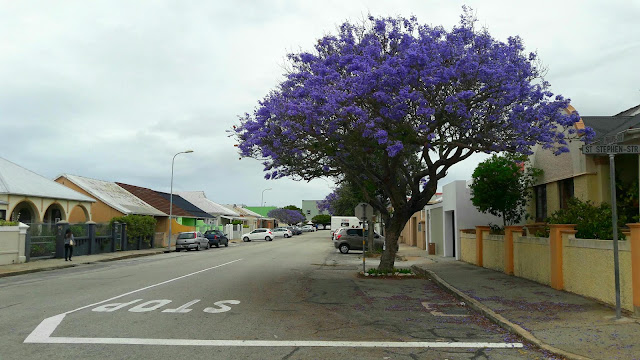 I don’t know why but I am noticing the blooming Jacaranda trees around Port Elizabeth a lot more this year than in the past.  Then I saw a picture of this specific Jacaranda Tree in Richmond Hill on Facebook earlier in the week and this morning while in the area recognised it.  So I just had to stop and take a photo.

Last Sunday Drama Princess and her school choir sang at the Doxa Deo Artuo church in Richmond Hill.  This beautiful little park with the old Erica building is right across the road from the church.  Imagine having a park like this close to home to walk the dogs, play ball with the kids or just sit under a tree with a book.

I quick drive around Richmond Hill the other day had me stop in front of the Jewish Pioneer Memorial Museum in Richmond Hill.  Standing there I realised that I have actually never been inside the museum so I can’t really tell you what is inside from a first hand perspective.  I can tell you this though. The museum is housed in the original synagogue which was used by the Jewish community between 1912 and 1954.  The museum features a collection of memorabilia, ceremonial items and historical photographic displays such as a bridal gallery, Jewish ex-servicemen memorial and much more.  It is only open by appointment though which is probably the reason I’ve never had the opportunity to visit.

Driving around Richmond Hill last week I just couldn’t help but to stop in front of St Phillips for a photo.  When Sue and Max started Port Elizabeth Daily Photo St Phillips was featured quite often as they live nearby.  Me on the other hand live across town and don’t get to come here that often.  Want to know more about the history of the church?  Just click the link for a post from last year.

I sometimes think I don’t do nearly enough urban photography.  I was waiting for a meeting in Richmond Hill last week and went for a quick walk around the block with my camera and snapped this pic looking across towards Central and the Donkin Reserve.  I really like the mix of urban and nature with the flowering Coral Tree.

A new restaurant recently opened in the McArthur’s Pool complex.  This post isn’t about the restaurant as I don’t even know what its name is, but rather about the people who sat outside having a meal or drink on the evening of Ironman.

I sometimes ask myself, “Self, how many people every wonder about the history of an old building when they drive past it?”  I snapped a picture of St Philips Church in Richmond Hill yesterday and decided to go and see if I can find any information about the church’s history and background.  Guess what? I’m going to share what I found with you.
St Philip started as a mission church way back in about 1872 with families, mostly Dutch speaking, who had moved to Port Elizabeth from what is now the Western Cape.  The church started in a wool store in Strand Street before moving to the Mechanic’s Institute in Donkin Street before a lack of space took them to the then St Paul’s Boys’ Schoolroom.  Here they became the responsibility of the Rector of St Paul’s with the ministry starting to prosper under a Mr PR Mollett, a teacher, who later became St Philip’s first Rector.  An application for land from the Municipal Council was made which was granted under a special Deed of Transfer dated 1883.  This deed vested the property under three Trustees, one of whom was the Mayor of Port Elizabeth and the other two elected by the congregants.  The foundation stone of the present church was laid in May 1883 with the church being dedicated in 1884.  The church has seen many ups and downs, losing numerous parishioners to other parishes when the Group Areas forced removal of families from Central and South End.  The Diocesan authorities expressed the view that the church’s closing was inevitable and the last Rector was appointed in 1960.  But guess what?  The church still stands today and still continues doing it’s work.

The St Philips Anglican Church in St Philips Street, Richmond Hill use to feature quite often on PE Daily Photo after Sue and Max started it as they stay just up the road from it.  I don’t get to Richmond Hill that often but had to stop at the church to *cough* look for a Geocache today.  I just had to take a pic or two.  I’ll post the other one tomorrow.

I was in Richmond Hill for an event a few weeks ago and decided to swing past the old Erica Building for a quick pic.  The Erica School for Girls was started in 1884 by Miss Mary Anne van Wyk, who initially gave lessons in the old Erica Hall.  After the Anglo Boer War it was decided to build a new school building.  The building, designed by architect W White-Cooper and built by HJ Beckett, was opened on 4 November 1903 by Dr Thomas Muir, the then Superintendent-General of Education.  The school has since outgrown the building and moved on with the building now being used by the Port Elizabeth College.