The day before the president announced that all beaches and rivers will be closed under the adjusted level 3 regulations, we spent the day in the Addo Elephant National Park. After coming out the south gate we took a drive around Cannonville and watched the holiday makers enjoy the river and shoreline. It makes you wish you had a boat to cruise up and down the Sunday’s on.

A few months ago we spent a weekend on a friend’s farm near Darlington Dam and he took us for a quick drive to see what the dam looked like. Unfortunately we didn’t get to go to the dam wall itself, so my picture is of the runoff below the wall.

Darlington Dam, also referred to as Lake Mentz is located off the main road between Kirkwood and Jansenville and was completed in 1922. The primary reason for the dam being built was to provide an adequate supply of water to especially citrus farmers further down in the Sundays River Valley with irrigation water for their trees.

The story of the land on which the dam is located goes back to 1905 when P.W.F. Weyers settled on Darlington in the fertile Sundays River Valley and planted fruit orchards and vineyards. Later a hotel, post office, shop, smithy, house and several outbuildings were established on the farm, but these all disappeared under waters of Lake Mentz when it was established in 1922.

The original dam was designed to store 142 million m3, but the high sediment yield of the Sundays River meant that sediment delivery into the reservoir basin quickly reduced its capacity. The dam wall was raised by 1.5 m in 1935 and again by 5.8 m in 1951. By 1979 the reservoir had lost a total of 41.47% of its design capacity.

The serious drought of 1966 and 1967 emphasized the necessity to commence work on the Skoenmakers Canal to link the Great Fish River to Darlington Dam in view of an expected increase in irrigation below Darlington Dam and the demand for water in the Port Elizabeth metropolitan area.

In the 1990s the ‘lake’ was renamed the Darlington Dam and today it has been incorporated into the Addo Elephant National Park.

When you mention Addo, most people think elephants.  They wouldn’t be wrong though BUT, these days Addo is so much more than just elephants.  Crisscross Adventures is a tour and adventure activity company based in the Sundays River Valley and they offer a wide range of activities from tours to the Addo Elephant National Park to quad biking, canoe safaris on the Sundays River and sand boarding.  Check out their new promotional video and tell me you don’t want to go and explore and experience the valley after seeing it.
The guys from Chasing the Rainbow went cruising on the Sundays River Ferry and topped off the trip sand sledding on the Colchester dunes near the river mouth with Captain Les.  Check the video they made doing this awesome activity right here on our doorstep. 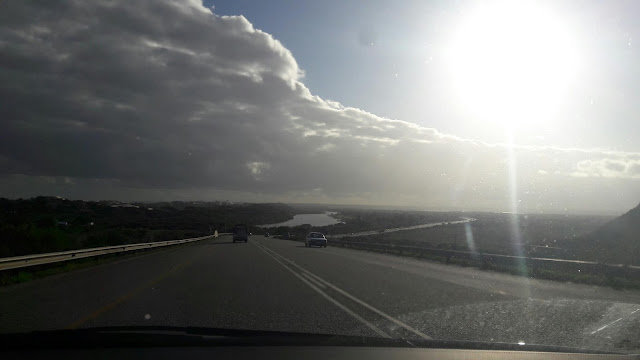 I was on the Wild Coast for a meeting this morning and drove back this afternoon with rain just about all the way.  As I was approaching Port Elizabeth there were more clear sky around and coming down the hill towards Colchester and the Sundays River the clouds looked like an approaching front. With my phone mounted on the dash I just pushed the camera button and clicked a pic.  A totally “wrong” picture in anybody’s book. Skew horizon, bad light, sun flare, dirty window and wasted space with the road but hey, that’s what I got under the circumstances.

The world is a book and those who do not travel read only one page – St Augustine
Very true words indeed.  But I also believe that while travelling you need to go off the beaten track every now and then as well otherwise you will just keep seeing what everybody else sees.  There really isn’t anything wrong with that, it’s just nice to see a little more sometimes as well.  And often it’s something simple, like driving along this tree lined dirt road surrounded by citrus orchards between Addo and Kirkwood.
The brand new destination promotion video for the Sundays River Valley and Greater Addo area have recently been released by Addo Tourism and ECTOUR showing how stunning this area right on Port Elizabeth’s doorstep is.  It also illustrates what I’vebeen saying for a while now, that Addo is a fully fledged destination now and so much more than just elephants.  Please share it around on social media if you enjoy it. 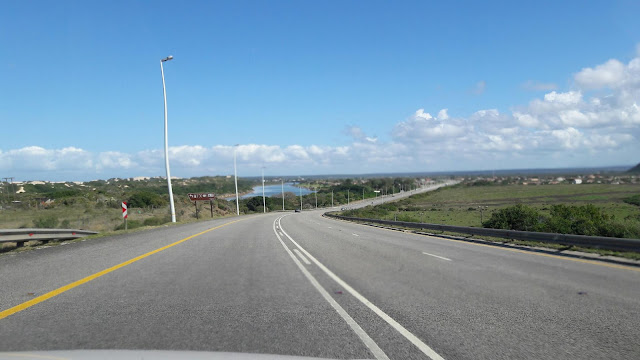 We spent the weekend in Kenton and heading back along the N2 this afternoon I asked the Damselfly to snap a pic with my phone as we came down the hill towards Colchester.  I’ve got to say this is one of those views that is a lot better in person than on a photo.  I’m curious why the lamp pole next to the road is wobbling…

The Sundays River Valley and Addo is synonymous with the Addo Elephant National Park and have never really been a holiday destination unless you went to visit the Addo Park.  But this has all changed.  The Addo area is about so much more than just elephants these days.  It has actually developed into a holiday destination all on its own.  Addo and its elephants are still the big attraction, but the area around the park has also turned into an adventure and activity mecca.  Zip lining, ferry cruises, sand boarding, quad biking, horse riding and more.  One of the more, and one that should be on your to do list, is Crisscross Adventures‘ Addo River Safari.  Some time ago, and I’m sorry but I uploaded the photos and never did the post, I got to join a number of journalists on a media trip with Chris Pickles and his team down the Sundays River.

We got picked up from our guesthouse and transferred to the starting point where we got giver the obligatory safety briefing.  Life jackets got dished out to those who didn’t feel that comfortable on the water and we were paired up for our journey down the Sundays.  My paddling partner was worried about not having paddled before, but Chris reassured us all that paddling experience wasn’t a prerequisite to go on the trip.  Turned out her was right, obviously, as stretches of flat calm pools were narrower channels with faster flowing water.  Never did we see water even hinting at a thought of turning white so this really is for everybody.  Our three hour gentle paddle down the Sundays River was one of beautiful scenery, sightings of birds, flowers, plants and even a water monitor dashing off into the reeds at our approach.

Two thirds along the way we stopped for refreshments and a walk up to a lookout spot over the surrounding valley with the river below while Chris showed us a couple of plants and told us some of the area’s history.  From here we were back in the water for the last stretch down the river to the pickup point.
The river safari really is for anybody who enjoys the outdoors and is keen to do something new.  The canoes are like flight deck ships and won’t capsize.  The only difference though is that these canoes are easier to control and handle than a ship loaded with war planes. Other than being splashed by you and your partner’s paddles, you won’t get wet, but the canoes do have water tight container for you to put your camera in if you want to take one. Photo opportunities there are lots.  Just a pity I was to slow to get my camera out for the water monitor.
Disclosure: I got to go on the Addo River Safari courtesy of Crisscross Adventures.  I received no further remuneration, wasn’t asked to write a positive post and keep full editorial control.